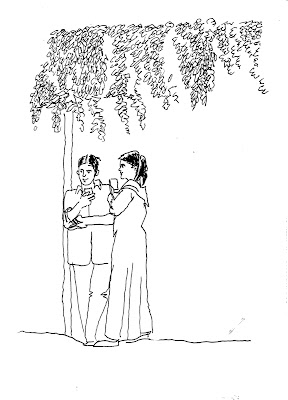 There are some cities in Morocco that took a while for me to find likable. Among them Agadir, Tiznit and Taroudant. To me they are still not cities to spent a lot of time in, but they did grow on me. And in each I have found something that I can do when I’m there. Taroudant of course is famous for its city wall of reddish clay. Indeed a very impressive piece of work. It is the reason some call it ‘Little Marrakesh’. When I was there with Heleen Toet we stayed in a ‘Riad’ of which the boundary was made up by part of that wall. With Heleen we stayed often in exotic and often luxurious locations. We were also driven around in a private car with chauffeur. When we were in Taroudant Khalid the driver had time off. We took taxis instead. For lunch we went to a place Bert and I had been to before. The restaurant is upstairs and on street level is a coffee house. The place is run by father and son. After lunch when we were out in the street again Heleen discovered that she had her passport no longer on her. We went back inside the restaurant but didn’t find the passport. Father and son then took over the search with Bertje. While they were discussing the possibilities and retracing the steps we had taken in Taroudant. Heleen and I sat down on chairs in front of the coffee house. Heleen wasn’t particular worried or upset it seemed. I thought it better not to interfere. Across the street two girls were passing the time of day. I started to sketch them. Heleen was looking on. The search party decided that the passport must have been left behind in one of the taxis we had taken. The son said that if the taxi driver had found it he most likely would have brought it to the police post next to the central taxi station. Cynical as always it seemed far fetched to me. However Bert and Heleen went off to the police post. Indeed The passport was there waiting for Heleen. Although outwardly unmoved by the episode the sketch had taken on a special meaning for Heleen.