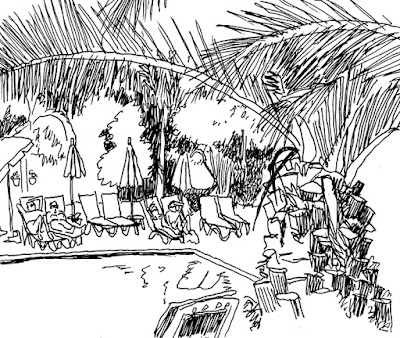 Agadir is actually not such a bad place considering that it is rather nondescript. At least it has lots of four star hotels where there is good Wifi reception. Agadir is more than just a beach resort town. It is the economic hub of the Souss valley. It has a university, many young people and a ‘modern’ outlook. It also has a seizable ex-pat population. It does not have a ‘heart’. Probably due to the fact that it was flattened by the earthquake of 1960. When I first started traveling south of the High Atlas mountains I didn’t want to spent any time there. I had seen some of the sun scorched, pink fleshed, crowds in shorts and halters in Marrakesh and I thought I would die of embarrassment if I saw an entire Moroccan town filled with them. Mind you I find it uncomfortable too if I see them in the Leidsestraat in Amsterdam. The first time I stayed in Agadir I was in the cheapest hotel closest to the airport: the Ibis Hotel on the eastern bypass as far as possible from the beach and surf fun. It was everything you would expect of that kind of hotel: cheap, minimal and characterless. But its position next to an Afriqia filling station and cafetaria where all the local MacGirls came to study made it bearable. However when Heleen Toet had to catch the plane in Agadir, Bert refused the Ibis. We stayed instead in the Tildi hotel close to the beach. It turned out to be a great choice. Most resort hotels also have noisy indoor entertainment of some sort. The Tildi hasn’t. Instead it has a beautifully appointed garden and pool. It is a big but quiet hotel for holiday making families and couples from everywhere. It also has a helpful staff and functioning Wifi. Not only that but it is easy to find being close to the main drag that connects the important dots on the way out of town. That means that it is also a great place to come to when one needs to meet or connect with people. On top of that it turned out that Agadir has plenty of places with a typical Moroccan ambiance whether ‘modern’ or ’traditional’. And that is why one is in Morocco in the first place, isn’t it?