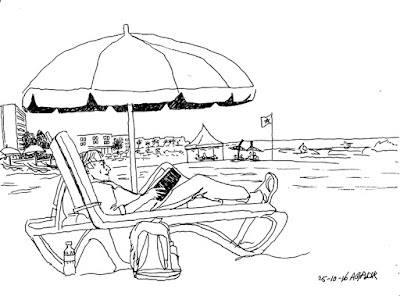 In the fall of 2016 I spent 5 weeks in Morocco two of them in the company of 92 year old Heleen Toet. The Flying Hippo Bert’s travel agency maybe floundering most of the time, but it boasts some very faithful clients. Heleen Toet is one of them. Heleen was born a very long time ago in 1924 into a comfortable middleclass Dutch family. Her father was an engineer with the Department of Water Management the most important state body in Holland. Her grandfather was a Jewish cobbler who converted to Protestantism and married a shiksa. Heleen has clearly inherited his trait of going against the grain. At eighteen she left home to work as an au-pair or nanny, not in Paris or London, but Sweden. She came back to Holland to the conformity of marriage and motherhood. She lived the elite life of a KLM pilot’s wife and had two daughters. I don’t know if in the end she divorced him or became a widow, but in the revolutionary sixties when she was already well into her forties, she radicalized. Her ’thing’ became communal living or in Dutch ‘Woongroepen’. In my youth I shared a house with friends and I squatted but I never knew there was a whole movement of people who were consciously experimenting with different forms of living apart and together. They formed associations, had newsletters, held countrywide meetings and organized worldwide conferences. Heleen was and to a much lesser extent still is, in the thick of it. Anyway it was a delight to travel in her company. She wasn’t just good company she was also an intrepid traveller and quite unfazed when things didn’t go according to plan. Like when she stupidly missed her plane or left her passport in a taxi. Maybe it was because of her devil may care attitude that everything came out alright and was filed as an interesting experience. She bought one of my sketches and that way made it possible for me to have my own font made.