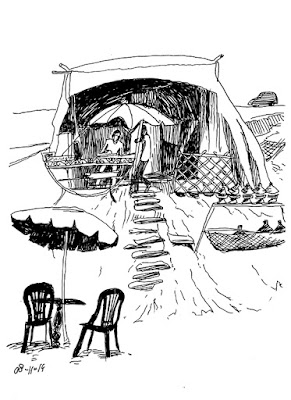 In the sixties and seventies the Atlantic Coast south of Agadir became very popular with back-packing ‘Hippies’. They used the ‘Hippy Trail’ and came via Marrakesh. Most just visited for a day or a week, but some stayed on attracted by the easy life style of the friendly Amazigh. It was an easy life for the youths from Western countries. There were lovely beaches, sun, cheap food and plenty of blow. However when too many came to stay and their lazy beach life started to interfere with the work of the local fishermen the latter revolted. It came to an altercation in Sidi Ifni during which the fishermen cleared the beach. However the Western beach lovers never really went away. The style changed. Forty years onwards the whole coast is being developed. Everywhere the French are building gated holiday villages for the masses and villas for the rich. However villages like Mirleft and Sidi Ifni still ooze a bit of that old hippy ambiance. One of the great perks of the region still is: eating fresh fish straight from the surf on to the BBQ and then to the plate. Everywhere there are flimsy huts in the sand above the flood-line that provide this delicacy.