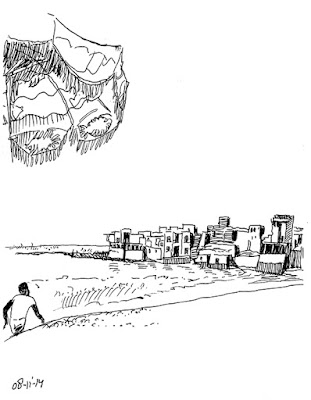 To the north of Sidi Rabat right between the mouth of the rivers Souss and Massa is the coastal village of Tifnit. I think that here in 670 AD the Arab conqueror Uqba Ibn Nafi reached the Atlantic Ocean. Here he rode his horse into the waves and cried out in frustration: ‘If the sea hadn’t stopped me I would have continued to conquer all heathen kingdoms west in the name of God.’ He turned his horse instead. It took another century before Moulay Idriss finally got the Amazigh to adopt Islam. Although only a few years after the death of the Prophet Mohammed Arab conquerors had brought Islam as far a Uzbekistan in the east, the Magreb or Wild West wasn’t as easily converted. It was only during the reign of the Ummayades that Uqba Ibn Nafi succeeded to cross the north of Africa. He did it by doing something no Arab warrior had done before. To solve the problem of army logistics in a hostile area he founded a city. It was about halfway between Jerusalem and the Atlantic Ocean: Kairouan. No wonder that this particular campaign is steeped in myths and stories. The exact spot where he had his ‘Talatta, Talatta’ moment has never been established. It was somewhere south of Agadir. Why not Tifnit?