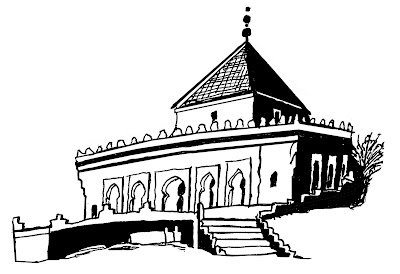 In the weeks before Bert and I left for Iligh I had been thinking about what had made Iligh special. As I wrote before: Bert thought it special because its architecture has a Sub Saharan outlook. What else made it special? That it was an important hub in the Trans Saharan trade? Iligh of course was only one of a number of hubs in that part of Morocco. Maybe it was because of its legendary connection with Michiel De Ruyter and Queen Victoria? Or was this heap of melted adobe buildings with some restored casbahs special because Paul Pascon had directed his focus on it? Why wouldn’t it be special because of that 16th century Sufi saint Sidi Ahmed Ou Moussa who settled there between the local Berbers? On the internet are a number of stories about the saint. Sidi Ahamed Ou Moussa was born in a village in the Anti Atlas somewhere between Ifrane and Iligh. Apparently he had been a good for nothing youth who was put on the straight and narrow after meeting and helping an old man who then expressed his thankfulness. He became a Sufi. According to the stories Sidi Ahmed Ou Moussa travelled around a lot and met with different adventures that were remarkably like what Odysseus encountered on his travels. In the end he settled in the valley where is now Iligh among people who were strange to him. His sainthood drew pelgrims and students. But that was not always appreciated by the original population. Sidi Ahmed Ou Moussa hadn’t completely forgotten his past as an unruly youth and if necessary knew how to use his fists. It was his son Ali who was not content with spiritual authority and sought material power. He established the chiefdom. I did a quick search on the internet for other Sufi saints whose offspring started a secular dynasty and found only one: a small short lived kingdom in Konya at the time before Ottoman rule covered the whole of Turkey. In Morocco a lot of the powerful ruling dynasties were started by the offspring of men with religious fervor. But they weren’t Sufi saints. I thought that made Iligh pretty special.