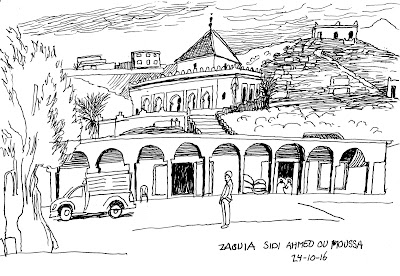 from the Sufi saint Sidi Ahmed Ou Moussa who had settled there in the late sixteenth century to a rich and powerful chiefdom that stretched from Ifrane in the south to Agadir in the north . Around 1670 it had irked the Alawite rulers of Morocco sufficiently to have a force send out to them. Iligh was destroyed and its inhabitants were either taken as slaves, killed or fled into the mountains of the Anti Atlas. However fifty years later one of the descendants of the Sufi saint Sidi Ahmed Ou Moussa came back and build up the chiefdom from the ruins. From the middle of the eighteenth century till the very end of the nineteenth century Iligh was back as an important link in the chain of the trans Sahara trade.It had ambassadors to all the great powers of the time. With Britain in particular it did a lot of trade. Iligh’s largest export product being Oistrich feathers. However changing geopolitics and evolving fashion wear brought Iligh down. By the time the French in 1912 took over Morocco as a protectorate Iligh’s fortunes had already declined dramatically. But the pull of the Zaouia of Sidi Ahmed Ou Moussa is unabated. Every year in August tens of thousand of people gather around the sanctuary for the yearly Moussem or pelgrimage. When Bert, Heleen Toet and I visited in October 2016, it was a quiet midweek day. There was no Souk and most of the regular little shops and workshops were closed for siesta.