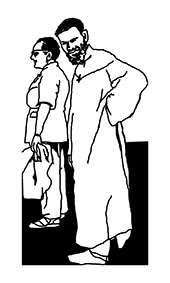 Early on in her research into Iligh Bert discovered that from its beginnings Iligh had been a welcome place to settle and a safe haven for Jews. The son of the Sufi saint Sidi Ahmed Ou Moussa, its first ruler, Ali Aboudmiaa, invited Jews from Ifrane to come and settle in the new chiefdom. Ifrane at the time was an important hub in the trans Sahara trade and it had already a flourishing Jewish population in the second century. The invitation was a timely one. The ruler of the moment in Ifrane inflicted terrible tortures and deaths on the Jews. The Jews were very important to the power and wealth of Iligh. In return they got security,land to build on and gardens and most importantly they got a cemetery. Apparently there are still many unpublished documents in Hebrew hidden in boxes in Iligh. In 1953 a curious little propaganda film was shot in Iligh by the Alliance Israélite Universelle. A film crew came to Iligh settled in the Mellah and filmed the story of a young teacher in shorts(!) who was going to teach the local Jewish boys away from their unhealthy rural ways and into the healthy ways of modern times. His teachings were mainly expressed in gymnastic exercises. ‘Il seront des Hommes’ (they will be men) was the rather threatening title. The drawing I made after a contemporary photograph shows a local man and a man from the filmcrew.