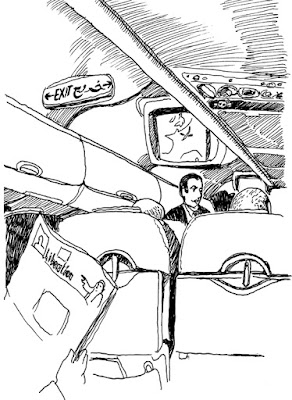 On November first 2016 Bert and I flew back from Agadir to Amsterdam. The plane was full and not having a seat booked we were placed far apart from each other. It is a four hour plus flight so I had plenty of time to think over our meeting with Aicha. Yes, I would like to come back to Iligh to make drawings especially if Bert could come along. Of course we would have to pay our own fare, but if we could stay there and we could do our own cooking that would make things a lot cheaper. Bert could do research into those mysterious documents and I could draw. And then I got the idea for a graphic story. We could make the history of Iligh come alive if we told the story from the point of view of Aicha’s father as a young boy. Start at the time that the film crew from the Alliance Israélite came to Iligh to film in the Mellah. That must have been a life changing experience for a ten year old. Him being the crown prince having to witness that the spotlights were turned instead on the scruffy kids from the narrow dusty alleys. That would make a great intro. From there the story could revert back to the time that Michiel De Ruyter did business with the first Aboudamiaa trying to sell Dutch hats and sides of smoked pork to a Muslim ruler. When the plane landed I thought I had it all in the bag. Bert wasn’t adverse to the idea, but wanted first to see if there was any interest in the Netherlands for a story on a little chiefdom on the edge of the Sahara.