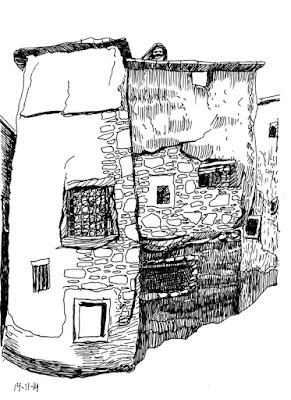 Bert Hogervorst has her own story about how she got interested in Iligh. She writes: 2013 I was struck by the prominent presence of Jewish people in the history of Morocco. I find it fascinating. Not only in the big cities but also in the south of Morocco where I visit the Ferkla Oases with Peti. The local museum gives a very elaborate presentation of Jewish life in the past. More Jewish traces in the Valley of the Draa river. The connection is with caravans and trade. I see old photographs on the Internet thanks to local man Kacimi. 2014 I’m in south Morocco in the fall with Peti and others. With some difficulty we reach Ifrane and visit there the synagogue. Ifrane has a surprisingly old Jewish settlement. There is also a Jewish cemetery next to the Oued (river). Later I find a reference about Ifrane in a blog of a Jewish American. The settlement is pre-Islamic. On the same trip we visit the Mellah of Tahala. After much asking around we find a very kind and knowledgeable young man. There is a small cemetery. The Souk is well preserved and many more buildings. It is a small ghost-town. We are shown a register of the Jewish families that used to live here. The young man brings the Souk and the Jewish community to life with stories from when he was a kid and the stories from his father and great-parents. These five Jewish families came to Tahala from Ifrane. He tells about the loss and sadness in the small town of Tahala when the Jews left. Apparently it were the Rabbys that left first. According to him there was a library with documents. Where was this? He waves vaguely towards the mountains. Would he have meant Iligh, a place I hadn’t heard of at the time?