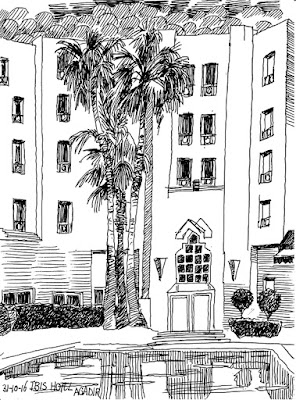 On the last day of October 2016 Bert Hogervorst and I met up with Aicha Aboudamiaa in the Ibis Hotel in Agadir where we were staying prior to our flight back to Amsterdam. Bert and Aicha welcomed each other as old friends. It was the first time I met Aicha. Still Bert didn’t know much about her. She is a daughter of Imam Aboudamiaa the descendant of the first ruler of Iligh: Ali Aboudamiaa. Bert had told me that the name in Arabic meant literally ‘Father of Tears’. One could only speculate what it stood for. Aisha didn’t have the answer there on that day in Agadir. Aisha told us that her father wanted to get international interest in Iligh and its history. Aisha was supposed to do that, but she has a full-time job in Agadir and not the time nor the connection. Could we help? I thought: I don’t think so! Bert told her about our visit to the Jewish museum in Casablanca and our talk with Zhor Rehilhil director of the museum. Bert told Aicha that she should get in touch with Zhor. The museum is very well endowed and Iligh obviously isn’t. But Zhor wants proof of the many documents in Hebrew that are supposedly in Iligh. Aisha tells us that her father doesn’t want any of the documents to leave Iligh not even for preservation and documentation purposes. He has been in contact with the government minister in charge with the national heritage. He is afraid that once the historical papers are in Rabat, he will never get them back. Her father wants to get the international focus on Iligh in the hope that that way enough money will be generated to get the documents saved without interference from up high. After excuses that nobody had been in Iligh to open the door for us when we were there, I showed Aicha the drawings I had made there. The one of the Zaouia and the two in the part of the stronghold that is open to the public. She likes them very much and asked point blank if I want to come back a.s.a.p. and make more drawings.