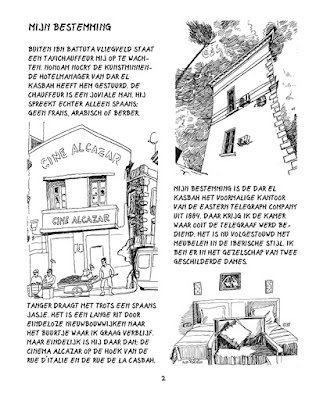 I was going to split up the book I had written about Morocco and divide it in different graphic stories. First I was going to do a try out. I would take Tangiers. Tangiers was easy I thought. There I had made many sketches in one neighborhood the Bab Teatro district. It is full of stories both contemporary and historic that are also interesting for people who would never go to Morocco. I wrote the text. It was too much really compared to the drawings I had. Next question could I make extra sketches from photographs? Was that ‘cheating’? Rework portraits of historic people featured in the story and taken from the internet? Did I have to draw the story? Or could I just stick to the random sketches I had made of the neighborhood? Could the images be totally separate from the content? Wouldn’t it become an illustrated book instead of a graphic story? Did it matter either way? I didn’t find a solution. In the end I decided to go back to Tangiers to make more sketches in the Bab Teatro district and to have them correspond with the content of the text. The graphic story about Iligh Bert Hogervorst and I were going to make was by that time already on the cards. It turned out that on the next trip to Morocco I could combine a visit to Iligh with a stay in Tangiers. Bert and I would go to Iligh before we would go to Tangiers where Bert was going to meet a group she would take on a train trip through Morocco. I would stay on in Tangiers for another week to make more sketches.The distance between Iligh and Tangiers is enormous, but with the use of busses and trains it could be done with ease in two days. It turned out we did it in 24 hours.