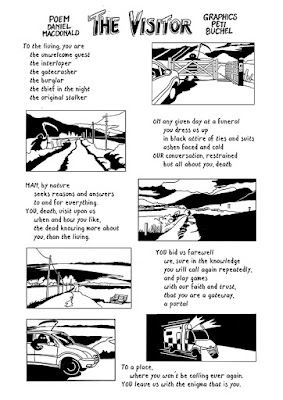 After the ‘cardiac event’ and the graphic story I made out of the sketches I made when in ICU I felt I really wanted to do graphic stories again. But I didn’t want to go back to the traditional ways of a template of frames and pen and paper. I didn’t see how to do it from scratch on the computer. But did I really needed to start from scratch? Didn’t I have oodles of sketches that I had made on hoof? Why not give them a platform too? I started some try outs. While recuperating from the heart attack I had made some sketches of the place where fate had struck. Around that time the subject of a meeting of the Achill Writers Group of which I was a member was ‘The Visitor’. My colleague Dan MacDonald had written a poem about death as the visitor. I asked him if I could use his poem for a graphic story. He agreed. His poem is about him confronting death while I made a parallel story in pictures of death stalking me. I did have to rework the existing sketches to a great extend though and I had to make two additional drawings. In the meantime I was wondering what to do with the Morocco book that was ready to go to the book designer. The fact that it would be twice the size of the Syria book sort of put me off. Why not break the book up into different parts and making the parts into graphic stories? If I did that, did I have enough drawings?