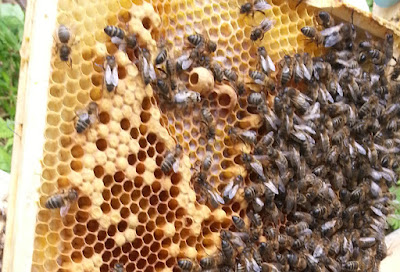 The worker bees had been busy with the succession to the hive’s crown. Apart from the queen cell we also discovered several queen cups. The incumbent queen didn’t lay any eggs in these. A friend told me this morning that her mother, Mrs Feldbrugge from Zuidhorn in Holland, had six beehives in the back of her garden. A beekeeper put them in for her, just like Timothy Stevens did for the Polranny Pirates. But after a while she got very interested, followed a course in beekeeping and from then on took care of them herself. I’m sure I won’t go that far… Unlike Timothy she wasn’t keen on swarming. Too much trouble with the neighbours in the village when they were visited by an unwelcome swarm. She destroyed any queen cup and cell she found on a frame.