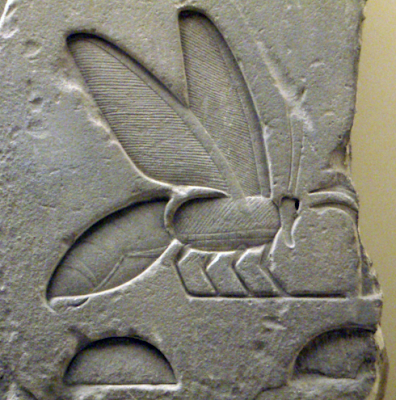 Beekeeping is as old as written history and probably much older. Egyptologist and Polranny Pirate Bert wrote to the Blog about bees in ancient Egypt. Bees were considered holy and royal, which has the same status in Pharaonic Egypt. Bees were traditionally kept in the Delta of the Nile. The Delta was part of the kingdom of Lower Egypt. Together with the kingdom of Upper Egypt it formed the double crown the Pharao wore. The official title that went with the kingdom of Lower Egypt was: ‘he that belongs to the bee’. The word bee bi.t.y in the old Egyptian lingo stood for Lower Egypt. The t was probably dropped when it was pronounced and sounded like the English word bee. Because of its holy/royal status pictures of bees appear on every surface in every temple. When visiting Egypt you can’t escape them. Photo Internet (I should go and see for myself)