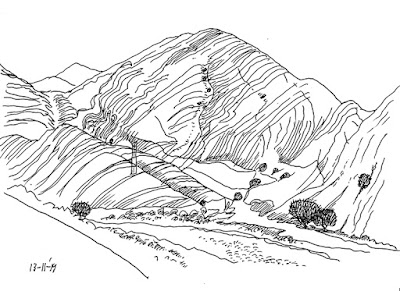 On the plane from Amsterdam to Agadir we discussed Plan B although the day before our departure Bert had had contact with Aicha. Her message was: my Dad is looking forward seeing you and be waiting for you on the 27th. Still Bert had stood at a closed door too often to be absolutely sure. If things didn’t pan out at least we would have ten days to spent in Southern Morocco. We had a rented car and could go anywhere. We could laze on the beach. We could go further south to TanTan. Drive along the south side of the Anti Atlas. See the western part of the Draa Valley. Discover areas we both hadn’t visited before. We could ‘do’ the surrounding country of Iligh. I could draw everything but the inside of the stronghold. Plan B almost looked better than Plan A. Because what was Plan A? Aicha wanted two things: the preservation of the old manuscripts and making Iligh known to the world. Bert was curious. Bert wanted to know what was in there. Was it really what Aicha had suggested it was? And in how bad a state was it in? That was her main motive. Me, on the other hand, I wanted to make sketches that I could turn into a graphic novel. The first I would make in 25 years. The plane circled over the agricultural lands of the plain of the Souss river. We had arrived! When we stepped outside onto the tarmac we were overwhelmed by that deliciously heady smell of warm, slightly damp air, Ozon and exhaust fumes. It reminded me in a good way of Ahwaz, Iran where I had lived and worked. It felt like a good omen. Everything would be wonderful. Whatever!