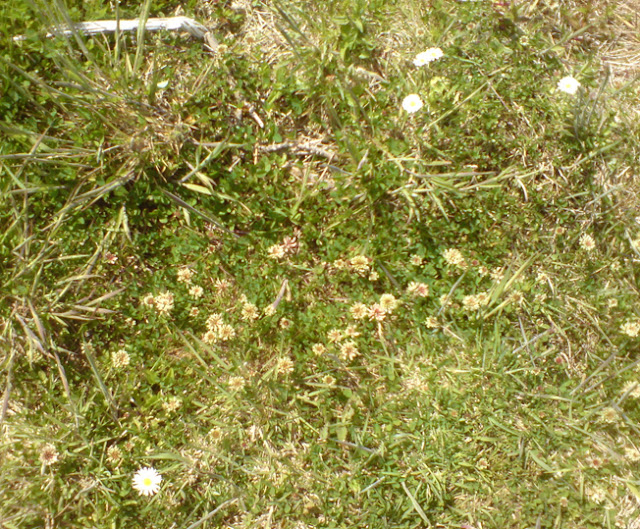 Yesterday Timothy swung by accompanied by Jude a colleague from the Westport Beekeepers Association. They had been replacing an aggressive colony at Achill Secret Garden with a more docile one. The hive now gets a new residence in Glenhest far from the madding crowd. Timothy also had installed a starter hive at Sheila McHugh in BullsMouth (another colleague of mine from the Achill Writers Group). He has now four and possibly five addresses in Achill of which three on Achill. That means that we will get our own ‘run’ in the future. Now Timothy gets in later and later because he has so much to do before Achill. Yesterday it was nine at night. The bees were grumpy and the midges out in full force. Still, the second hive has a honey box now too. The stores were sufficient and things were generally going well. One of the bee’s favourite summer flower is in bloom: white clover. The picture shows the first ones but soon the garden was covered… till Mike Wilson came yesterday to cut the grass. But there are still plenty left. The most enthralling ode to white clover is in Soma Morgenstern’s ‘In einer anderen Zeit’. If you read German it is well worth the effort. I found it ‘unputdownable’.It’s in the library of the Polranny Pirates.