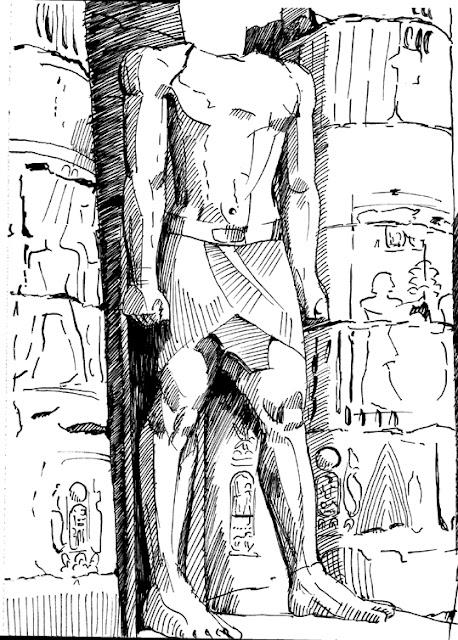 The drawing I made in 1982 in the temple of Karnak. Surprise, surprise: a bee is visible between the knees of the Pharao. Ancient Egyptians celebrated the divinity of nature not only in temples but also on the walls of other structures. They did it in sculpture, in relief and in painting. The method was everywhere the same. In detail, with great skill and knowledge of the subject they depicted nature in all its forms: but always from the same point of view. They did not care about perspective or direction. They wanted the world to recognize immediately what it saw. That’s why Egyptologists came to know so much about what grew, flew and flowered. Apart from making art, the ancient Egyptians also did a lot of writing. Again it was done on walls but also on potshards and paper they made from papyrus reeds. They used a kind of pictogram based alphabet: hieroglyphs. Everyday business was recorded on shards, letters were written on paper and religious and official messages were chiselled into walls and pillars. That’s how knowledge about apiculture was as vivid then as it is now. Polranny Pirate in house Egyptologist Bert wrote: ‘The oldest pictures of nature in all its glory and in detail, as far as we know, was on the walls of the sun temple of Pharao Niuserre. He ruled in the days of the builders of the Pyramids almost 5000 years ago. It was maybe also the first time aspects of apiculture were shown.‘