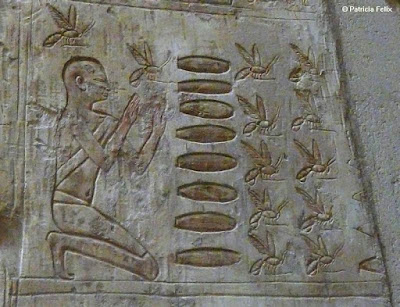 The people living on the shores of the Nile enjoyed the fertile shore and all that nature brought. But they were also sensitive to and reliant on the seasons: especially the rainfall in far-away central Africa where they had no power over nor knowledge of. And then there was the desert directly adjacent to the crops, where nothing could grow but harboured all kinds of scary things, both animal and human. No wonder that the religion of the Egyptians was nature fixated; not like our own religions that are human centred. Everything they had no power over the Egyptians considered sacred: possessed of divine powers, even the house cat. And the bees, which brought honey: the only sweetener the ancient Egyptians had. The picture was taken inside one of the many decorated tombs of ancient Egypt. A farmer is kneeling in front of his beehives. Again: thanks to Polranny Pirate Bert the Egyptologist