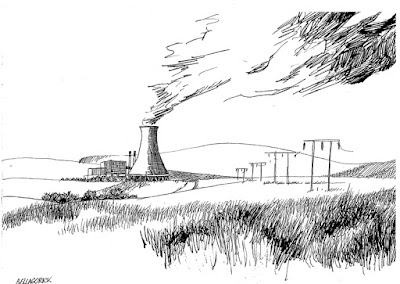 Once upon a time Ireland went for self-suffiency. That’s how it came about that the first and only electric power-plant running on turf was build on the massive bogs of the North Mayo plane. One could see it from miles around. A village with a post office, a pub, a shop and several houses had been build around the plant. You don’t see them in the drawing because they are in the valley where the river runs through that provided the power station with cooling water. It was a welcome stop in the middle of the nothingness of the immense bog. Was it a venerated landmark or an eyesore? Was is progress or folly? To me it was all of the above. But then Ireland became part of the big global economy and the use of turf as fuel was laughed at: too expensive, too labour intensive. Oil now, that was the thing. The drawing was made during the hot summer of 1983. I remember sitting by the side of the road, sketching at full speed being pestered by horseflies. One day they tore down the power station. A big bang and it crumbled. By then the post office was closed, followed by the shop and the pub. Most of the village stands empty. There is a wind-power park to the north of Bellagorick now because the already existing electric grid is at hand. Why this post on a blog about bees? Timothy’s colleague Jude from the Westport Beekeepers Association gave the excuse. He keeps a lot of hives up that way. Lovely heather honey no doubt.