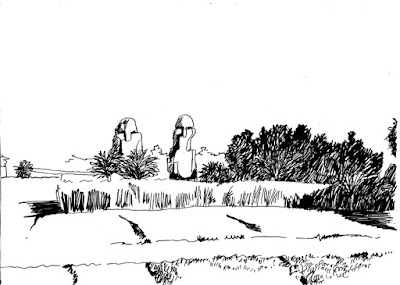 Apiculture was popular in the whole of Egypt but particular in the Delta region. Hives were made of mud or reeds covered with mud. Empty hives were also used as wall insulation of houses. The cylindrical hives were stacked horizontally, sometimes up to 500 together. The harvesting was done twice a year: in spring and autumn. Because of the climate there seem to have been no winter hibernation. The hives were transported to where the flowers were. They had to be moved again when the farmers were clearing the ground by fire after harvest or when the Nile water rose and it was necessary to bring the hives to higher ground. The moving could cause some logistic problems especially when there were many hives involved. It is all written down in queries, prayers and petitions and mercifully kept for prosperity. The drawing is of fields on the banks of the Nile and two huge statues near Luxor