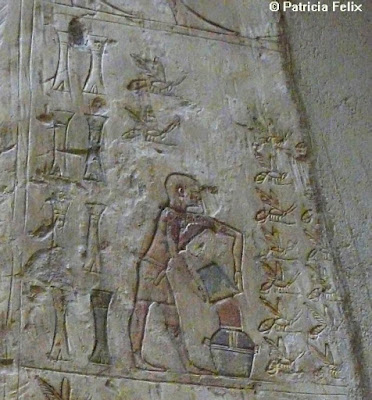 In contrast to many other customs in Ancient Egypt the harvesting of honey and wax are a bit of a mystery. There is a picture on the wall of a temple about how the hive was evacuated. Smoke was blown into the back of the hive and the bees escaped through the entrance in the front. The rest is conjecture, but in Egypt traditions rarely change and it is pretty safe to suppose that neither has beekeeping. To harvest the honey the combs are gathered in a cow skin. Next the combs are crushed by treading on the skin. Through a hole the honey now flows into a container. What is left in the skin is washed out with a bit of water. Finally the honey passes through a sieve made of blades of grass. What’s left in the skin is the wax. The wax is heated to melting point in a water bath to prevent it from catching fire. Impurities floating on the surface of the liquid wax can be scooped up. Afterwards it is strained and put into a bag press. It has been estimated that for every kilo of honey somewhat more than sixty grams of wax can be won.