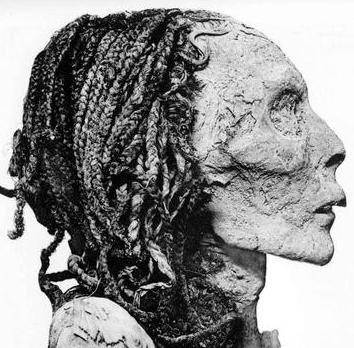 Honey was the only sweetener the ancient Egyptians had. It was added to wine, various kinds of bread and cakes. Medicines and salves often contained honey. The practice was to apply honey to open wounds—a reasonable treatment considering its antibacterial and fungicidal qualities. Mead is also made of honey. Being universally appreciated jars of the stuff made excellent presents when visiting people abroad. Temples kept hives because Gods had a desire for sweet things too. Honey was found on the table and in the kitchen of the Pharaos and from them it went down the social strata. Even lowly servants dipped the finger in the honey jar. Demands ran so high honey sometimes needed to be imported. Wax was used for sealing things from the seal on documents to the inside of amphora. Wax was also used for plugging up orifices of mummies, as glue and in hair styling, in model making and painting. It was a universally used material, but not as candles. The picture is of the hair and hair extensions on the head of the mummy of Nefertari