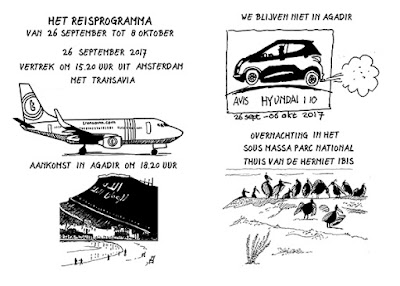 The situation surrounding our trip to Iligh, what Bert and I would find there and what we would do with it was so confusing we had a good laugh about it. We decided that whatever would happen, we would take it in our stride. Whatever bridge we’d encounter, we’d cross. Whatever we would find on the other side we would take on and not despair. In short: this was it. This was the story. This we would shape into a graphic novel. Well, supposedly one had to know beforehand what the purpose of the effort was and which part of the public we were aiming for. Initially the Jewish History Museum of Amsterdam had been interested in it as a possible part of educational projects they were doing to create more understanding of Jewish history among Muslim school-age children of Moroccan descent. Many kids with a Moroccan background believed that current Israeli politics was what being Jewish was all about (to say it politely). Anyway with this radical change of plan, we didn’t know anymore who our public was and if we would have any at all. And the designers of my website whom I told our plans to also pressed the importance on me of making it fit tablet and smartphone. I did a little try-out before I left: it looks as confusedly scattered as I felt.