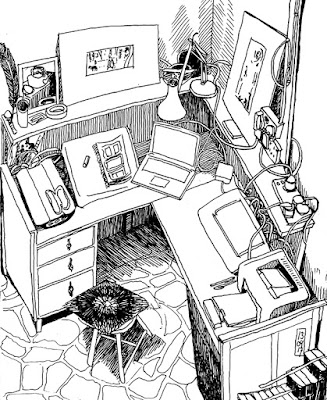 In the two months between booking the plane tickets and hiring a car for our trip to Iligh and actually traveling doubt started to creep in. At least with me. Bert and I rarely spoke. I was busy in Polranny, Ireland and she was busy in Amsterdam. I knew she tried a couple of times without success to get Aicha on the phone or by Messenger. We knew already that she had been ill for quite a while in the winter. But what was ailing her we didn’t know. What were we going to find when we stood at the door in Iligh? It was all one big uncertainty. Letterlijk & Figuurlijk the book by Joost Pollmann about the different forms a graphic story could take had had a profound influence on me. Did it still make sense to draw a straightforward historical story set into the traditional framework? I had visions of me researching endlessly the original props surrounding Michiel De Ruyter on his trips to Iligh. And how about the detailing of the court of Aboudmiaa? It would take years for the graphic story to get finished. On top of that I always had said myself that a ‘historical’ movie said more about the time it was made in than the time it was supposed to be in. Wouldn’t it be the same for a graphic history? And what about making an entire graphic novel on the computer instead of on paper? Was Photoshop really the right software for it or did I have to resort to Illustrator or Indesign? Did I have to take a subscription out for the software and do a course in how to use it? Did I really want to spend time and money on those things? When Bert and I got together again three weeks before the departure we didn’t know anything anymore. Wasn’t the whole rigmarole surrounding our involvement with Iligh a story in itself?