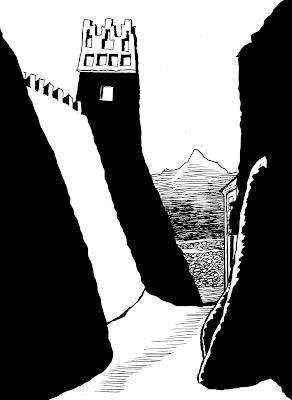 Bert Hogervorst and I are making a Graphic Story about an small former chiefdom in the south of Morocco. This is how we got into it: Bert visited the stronghold of Iligh on the edge of the Sahara desert for the first time in March 2015. She owns a company for private travel called Flying Hippo and was there with a small group. Bert was charmed by the architecture of the old buildings of ‘Maison d’Iligh’. They looked more Sub-Saharan and less traditional Moroccan. There was a sign that said: Museum. She knocked on the nearest door. Nobody was at home. A few days later in Agadir she met up with Aisha Aboudmiaah the daughter of the owner of Maison d’Iligh. Aisha told Bert about a chest containing 1500 documents in Arabic and Hebrew in addition to a library of 3000 old books. All of which are in grave danger of falling apart with age and neglect. At her return in Amsterdam Bert contacted the Jewish Historical Museum. They had organised in 2009 an important photo exhibit about Jewish life in Southren Morocco. She also contacted the director of the Musée du Judaisme Marocain in Casablanca: Zhor Rehilhil. But Zhor reacted doubtful: is there proof the chest really exists? In October Bert and I visited her. It was an interesting and informative meeting, but we didn’t succeed then to bring her in contact with Aisha.