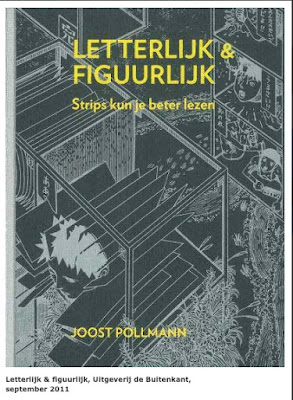 When Bert came to Ireland in the summer of 2017 she brought a Dutch language book with her: Letterlijk & Figuurlijk (Literally & Figuratively) by Joost Pollmann. It was the precursor of ‘De Strip Professor'(The Professor of Comics)a bundle of 50 essays on different aspects of ’telling a story in images’. In that anthology Joost also included a few lines on me and my ‘Urban Sketching’ in particular the sketches I made while in ICU after a cardiac event. When I got home from hospital I reworked them on the computer into a graphic story using Photoshop software. Curiously enough Joost had headed the essay in which I featured: ‘After Photoshop’. The book had been an eye-opener for me. I had used the medium of comics on and off to tell a story since I was 13 years old and over the years had published three graphic novels. It turned out: I didn’t know a thing about the medium. In ‘Literally & Figuratively’ Joost puts the medium under the microscope. What is a comics/graphic story? Is it literature, is it art, is it film or is it nothing more than ‘The Funnies’? Joost concludes: it is a separate medium, should be treated as such and should have its own academic platform. Which it hasn’t even though it exists since the invention of the printing press. The title refers to the dual aspect that is so unique to a comics/graphic story: the written word and the imaging. It also refers to how the story is told. Is it told in a literal manner keeping close to a story line as for instance in literature? Or is it a bit like art: an expression in images and maybe words of an idea or emotion or just some vehicle for the use of materials and skills? In Dutch the title also refers to lettering. An important aspect of the medium as it is usually an integral part of the image and isn’t conceived or printed separately. Anyway the book shook up my idea of how the graphic story about Iligh could take shape.