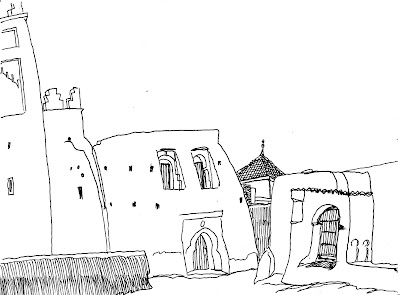 In October 2016 Bert and I called on Maison d’Iligh. Although contact was made beforehand again nobody was there and again we finally met up with Aisha in Agadir. Bert asked her for proof of the chest. Aisha promised a photograph. Then the problem was revealed: her father had contacted the ministry for culture in Rabat, but they only want to make the documents and books safe for the future if they can stay in the national library. That was a bit too much to ask of the last descendant of the illustrious House of Iligh. Moulay Imam Aboudmiaah wants his daughter to put Maison d’Iligh on the international stage. It is his only hope to safeguard the place, treasures and history from oblivion. But Aisha has a busy job and it is not an easy task to honor the wishes of her father and save Iligh. After looking at the sketches I made in Iligh and the Zaouia she asked me to come back and made a book of drawings of Iligh. Preferably soon. However there are no funds. In the plane going back to The Netherlands Bert and I decided that a booklet with drawings of Iligh wouldn’t do. Bert had already researched a bit the history of the small kingdom at the edge of the Sahara that dates back to the seventeenth century and its Sufi saint founder. She had also discovered the interesting connection Michiel de Ruyter had with the place and a tentative link to the Sephardic community in Holland. It wasn’t difficult to come to the conclusion that only a graphic novel about Iligh and its history would do.