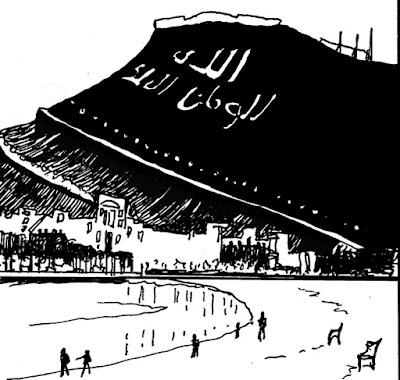 When we booked out trip to Iligh we had decided that we wouldn’t spend the first night in Agadir, but coming from the airport directly turn south and stay right on the Atlantic Ocean at Les Dunes B&B in Sidi Rabat. Agadir is an ginormous conglomeration that stretches forever more south and eastwards. To the south it melted together with the towns of El Melloul and Inezgane two busy and chaotic hubs. Agadir was founded by the Portugese and became an important port under the name of Santa Cruz Do Cabo De Gué. But I’m sure there was already a settlement there before the Portugese came. In 1541 the Moroccan Saadi dynasty took over and build a stronghold on top of the mountain that still dominates the town: hence Agadir. By the middle of the 17th century when Michiel De Ruyter used the port, it was still known among traders as Santa Cruz. I still remember that when I was at secondary school in the winter of 1960 an earthquake completely destroyed the town with the loss 15.000 people. It was the first time I heard of Agadir. However the stronghold on the mountain didn’t suffer. The inscription in Dutch ‘Vreest God ende Eert den Kooning 1746′ (Fear God and honour the King 1746) is still there. Nowadays a rather similar inscription in Arabic graces the side of the mountain: for God, King and Country’. Agadir is the biggest holiday town of Morocco. Actually it’s not bad for a town mostly dedicated to sun worshipping, scantily dressed, white, heathen, foreigners with a lust for alcohol.It also services the agricultural output of the Souss plain.