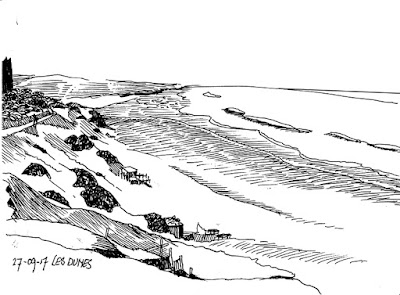 Leaving Al Massira Airport in our rented Hyunda i10 darkness had descended. Fortunately Bert and I knew the road well and Bert also has an App on her phone that works as a GPS. It doesn’t have every location in Morocco as we discovered later, but it promised that it would bring us to Sidi Rabat. If you have driven the road once you can always retrace it. It’s that easy. All you have to do at every roundabout is follow the signs for Tiznit on the N1. There are a great many roundabouts before we turn off for Sidi Rabat and that turn off is not at a roundabout. We left Agadir to the right. After driving through a string of merrily lit up villages we finally came to the dark countryside and eventually the turn-off. The road goes in a straight line through the flat agricultural land. In a small village at the t-junction we take a right and after 8km we are in Sidi Rabat where the road ends in the sand of the beach. Sidi Rabat is situated in what is the Souss Massa National Park home of the Black Ibis. It’s there where Abdelrahman has a B&B. I don’t know if it is his entirely. I think he co-owns it with Germans. Foreigners can not ‘own’ anything outright. That is the prerogative of the people whose family originate from here. But whether it is because of the Germans or Abdelrahman the B&B in the dunes is excellent. Before bed Abdelrahman makes us a Omelette Berbère in a tagine. We fall asleep with the sound of the ocean in our ears. In the morning we wake up to the sound of twittering birds. We walk in the cool sea air to the beach where I make the first sketch of this trip.