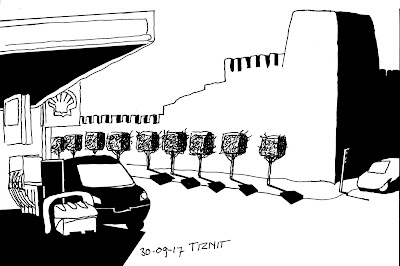 Is Tiznit on the N1 or is the N1 there because of Tiznit? It must be the latter because the French occupiers made Tiznit into a garrison town. It’s famous for its silver smiths. That means that in the past it had a Jewish population. But those thing don’t make an attractive town. Better drive through quickly in search of better places to visit or stay. But for some strange reason I always got stuck even though the same old man on the same old moped is on the look out for any car with foreign or car hire license plate. He attaches himself to the car like a leach as soon as we enter the walled city by its main entrance. He will offer his assistance and when we decline he will annoy us till he’s bought off. By then we are on the main square ready to park the car. But Tiznit also is the centre of a whole province or ‘departement’ and has a great covered food market and in the outskirts a real Supermarkt. It turned out, Tiznit isn’t as bad as the first impression warrants. During our discovery trip to Iligh Tiznit became a very important link and even a fun place to come to. It also has a comfortable Riad with a roomy and leafy garden inside the city walls. What sold me was the kiosk on the main square that not only sold cigarettes, bottled water, biscuits, batteries and other important items, but also books in French and Arabic. There was a whole collection of fiction and non-fiction on the ‘leaden years’, the years of cruel oppression during the reign of Hassan II. There were also books in French on Feminism and books with a feminist intent. The books in French were published by Fennec Press a Moroccan publisher of very cheap paperbacks.