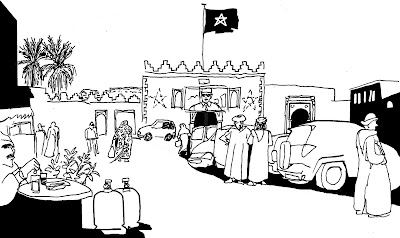 The main square of Tiznit is not the prettiest place in Tiznit, but it is the place where the tourists eventually gravitate to. There are coffee houses where one can sit down, drink NosNos, eat Pizza and watch the farmers coming to town from the outlying villages. I made this drawing the first time i found myself in this town. This trip Bert and me were there again. Bert had to get a Moroccan sim card for one of her phones. After scoring the Sim card and buying a pile of paperbacks with feminist content, we sat down for a coffee. I don’t think a market is held in the square anymore. Neither will there be military parades. The building at its short side where one sees the picture of the ruling king was probably the garrison in the days of the French. It still looks pretty official. The square is now used as carpark. The farmers coming in park their 4wheel drives there. Some of the cars are top of the range BMW and Merc SUVs. We were looking out on the preposterous posteriors of two of those, when a poor looking, old woman in dusty wraps sat down in the shade between them. Something about the way she squatted down alerted me. I said to Bert:’I’m sure when she gets up, she will leave a mess on the pavement.’ The good thing about wearing all those garments is that nobody notices when you are taking a piss or shit in public. After a while the old woman got up and walked away. A puddle was dripping down from the side of the expensive Merc onto the dust. Point taken. A little later she came back. She was in the company of a farmer, probably her son. The man zipped open the BMW SUV and got in behind the wheel. Herself stepped nimbly over her puddle and got into the passenger’s seat. Poor? my ass and of course she hadn’t dirtied her own car.