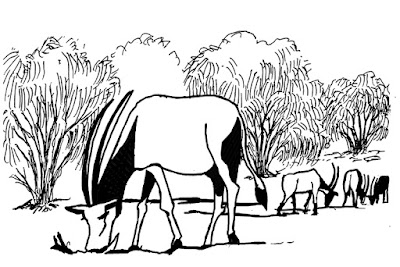 Once upon a time the animals that now only live in the nature reserves of Sub Saharan Africa lived also in Morocco. After the ice age, when the ice retreated northwards the sands of the Sahara drove a wedge between the north of Africa and the rest. The habitats of the flora and fauna were also cut in two. At the time of the first Phoenician inroads into Morocco the country must have been like Paradise. Humans and animals must have mingled freely in the green stretch between the sea, Atlas mountains and the Sahara sands. The Phoenicians were succeeded by their kinsmen the Cartages who ruled the whole of north Africa. Hannibal was the most famous of the Cartages. He crossed the Alps with North African elephants in a bid to defeat Rome. However Rome in the end destroyed Cartage. After that the Romans colonized North Africa. Morocco became the purveyor of ‘wild’ animals to fight the gladiators in the Roman arenas. They were shipped over by shiploads of hundreds. The Romans must have done a lot of harm to the indigenous wild life, but it took till the beginning of the 20th century to really end the diversity of African fauna in the country. Not even the ostrich remained. In the Souss Massa National Park I could sketch these gazelles.