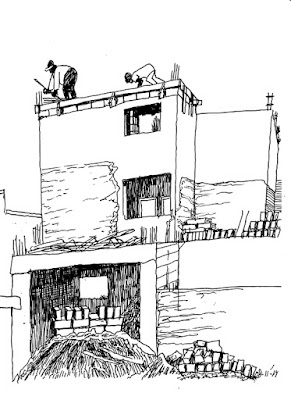 When the long narrow stretch of coastal lands became national park there were people living there. There were several families that had claims to land and there were two villages: not only Sidi Rabat but also Tifnit. Some fishermen have built houses inside the face of the cliffs. The population of the endangered Black Ibis has stabilized thanks to the ban on grazing in the National Park. But a new challenge has emerged: illegal housebuilding. It will be hard to stem the tide and bring to a standstill the growing number of dwellings that infringe on the building rules. The culprit is beach tourism. The locals want to profit too from the development of the Atlantic coast south of Agadir. Maybe new built houses are not allowed, but in Sidi Rabat the original homes were not more than huts. Those huts are now transformed into modern villas. In 2014 when I was here with Bert and friends we stayed in one such villa. It was big and luxuriously appointed. From my bedroom I saw renovation work being carried out on a former fisherman’s hut. Coming back almost all the huts are renovated. Sidi Rabat is an amazing place to stay if you don’t mind it that the village is out of the way and the lack of touristic amenities.