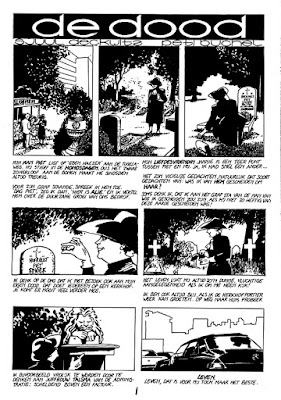 In the late eighties I approached the poet/writer/magazinist Sjuul Deckwitz with the request to ‘do’ something together. It resulted in the graphic novel ‘Alie Snoek mijn leven’ (The life of Alie Snoek). Originally it appeared page by page in the magazine of Dutch comic/actor/play-write Paul Haenen. Later it was collected into a book. Ali Snoek was the first project I did together with somebody else. Later I would work together with another cartoon artist but never with a poet/writer. Because Sjuul Deckwitz at the time had a very distinct and original style of writing, I left the initiative to her. She wrote the text and I would make it into a graphic story. She communicated with Paul Haenen about when the next deadline was, wrote a little story about something in the life of Alie Snoek and dropped it into my mailslot. We never communicated about either the graphics or the story. It turned out to be gas! I thought Sjuul’s stories absolutely brilliant. And she liked my renditions. I never found it difficult to turn her text into images. After the first page (on view here The Death) I never kept to the literal story. I let the drawings tell a parallel story to the text. From the beginning I left the text intact and wrote it under the frames in full. No Balloons. No frames within the action frames. It worked! Of course it wasn’t a totally new way of telling a graphic story but to me it was. However it was also the last graphic story I did. I got very much into the business of cartoon making working for clients and earning good money. I had nor the time or the inclination to continue with ‘free work’. Until I went to Syria and started ‘Urban Sketching’. But that is another story.